Who Do We Represent? 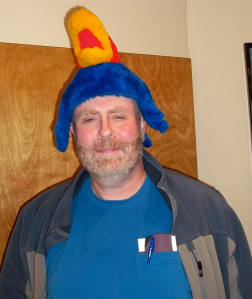 At the intersection in front of our house there are big red octagonal signs with the letters S T O P printed in white on them. It is unclear what the function of these signs is. For the most part, cars drive on past them without allowing them to impede their progress at all, although a few cars appear to accelerate when the signs come into view. This irks me, partly because I’ve had several close encounters with those drivers while I’ve been pulling out of our driveway or crossing the street with our slow, aged dachshund, and partly because I’m turning into one of those old men who derive pleasure from shaking their canes at reckless young whippersnappers. And so I occasionally find myself engaging in futile verbal exchanges with drivers of passing cars. I vent some anger while they generally ignore me, and the world turns on.

Recently, however, I have made a conscious   effort to restrain my     emotions and to change the way I project myself to the world. A Yiddish proverb tells us der kaas iz a nar. Anger is a fool. It seems unbefitting of the president of our congregation to be out on the street making snide comments to passing motorists. It could cast our entire community in a bad light  –  what if someone recognized me as the president of the LJCC and wondered what kind of group elects a hot-headed bum to represent it? I don’t just represent myself; I represent all of us, and I try to moderate my behavior.

But at a deeper level, don’t we all represent the community? It isn’t just the executive officers who are the faces of the Lawrence Jewish congregation; it is every member. We should all be striving to represent us in the best way possible. I should not have waited until I was president to consider what kind of a public presence I display; I should have been working at being a mentsh the whole time I’ve been associated with the Jewish people, which goes back pretty close to the time I was born.

As promised, I will conclude with the phrase Bob reponendus est.  We must find a    successor as treasurer to Bob.

This entry was posted in Community. Bookmark the permalink.